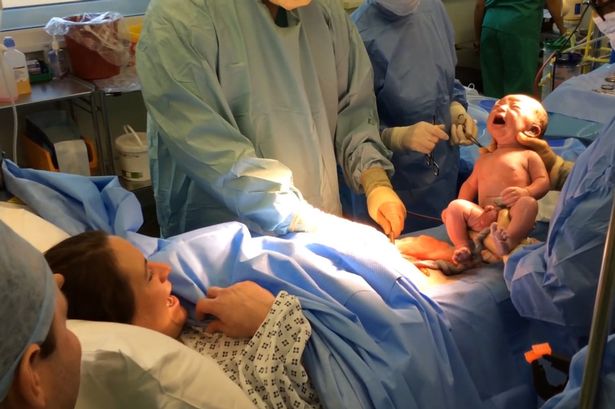 What’s being hailed as a new kind of C-section will be offered to mums this summer.

It’s described as “natural”, but can any C-section be natural? Not in my book.

But this C-section is an attempt to make caesareans more mother and baby friendly.

That’s because it’s skin-to-skin – mother’s skin to baby’s skin. Nothing in between. And I’m a passionate advocate of skin-to-skin births. They have so many proven benefits for mother and baby. I wish all births could be skin-to-skin.

Babies born by a natural caesarean (with epidural anaesthesia) remain in the womb after it’s cut open.

Their heads are slowly brought out and they’re then left to manoeuvre their shoulders and body out, lie on their mother’s tummy, encouraging bonding and guarding against complications.

“It’s about the mother,” says Jenny Smith, a senior midwife at Queen Charlotte’s and Chelsea Hospital in London, a pioneer of the method.

“After the incision is made, the curtain is removed and the mother is able to see her little baby wriggle out. It’s a special moment that is missed otherwise.

“The baby remains in the abdomen for up to four minutes and the mother can look at it, see its little face and eyes, and when it wriggles out, it is the parents that first determine the sex.”

The baby’s movement in the abdomen has no effect on the size of the scar. In some cases, if the baby is unable to manoeuvre itself entirely, the doctor will use a guiding hand.

With a natural caesarean, doctors delay cutting the umbilical cord so that more oxygenated blood can flow from a mother to her baby, reducing the chances of iron deficiency at six months.

However, as soon as the cord is cut in a natural caesarean, the baby is placed skin-to-skin on the mother’s chest and stays there for the rest of the surgery.

More than 160,000 women have caesareans each year in the UK, but a natural one will be offered only to women who have reached 37 weeks of pregnancy with no complications.

Dr Belinda Green, from University College Hospital, London, is going to find out whether natural caesareans result in fewer babies getting respiratory complications – something commonly seen in babies delivered by caesarean.

She says: “So many women say the bond with their baby is stronger after a skin-to-skin caesarean, and there is evidence to suggest it reduces a number of complications after birth, including problems with maternal mental health.”