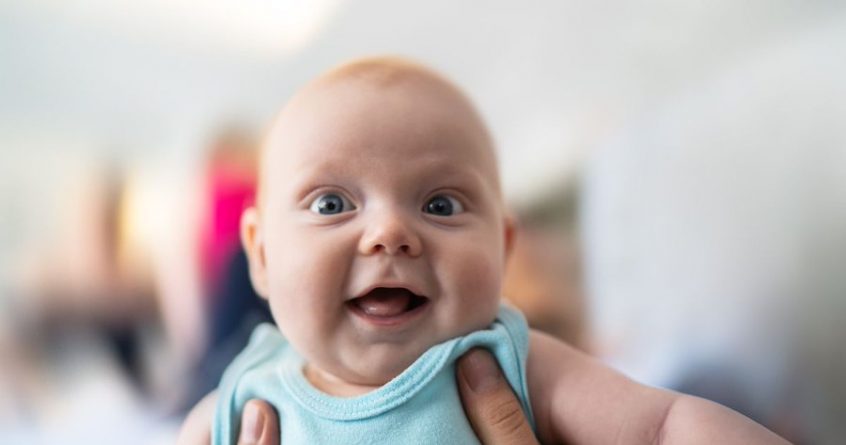 Children laugh a lot given the chance. They find everything funny or silly or jokey. Truth is, laughing is good for them. Every time they giggle, their T cells spike. Yes, those protective T cells of the immune system.

So, in a way, making your children laugh keeps them healthy. But when does a sense of humour emerge?

Well, researchers from Bristol’s School of Education have mapped, for the first time, young children’s ability to laugh and make jokes. This joyful study involved nearly 700 little ones, from birth to four years.

Their findings reveal the earliest age humour emerges and how it’s expressed in the first years of life.

The team created a 20-question Early Humour Survey and gave it to parents of 671 children aged from nought to four in the UK, US, Australia and Canada.

Take a guess at the earliest age a baby sees a joke. Would you believe it’s one month old? The team estimated half of children appreciate humour by two months, with half acting out humour by 11 months.

And once children make you laugh they do it all the time, with half of ­children having joked in the last three hours. Kids love jokes.

The team identified 21 types of humour. Children under one year of age appreciated physical, visual and sound forms of humour. This included hide and reveal games such as peekaboo, tickling, funny faces, bodily humour, funny voices and noises, chasing, and misusing objects, such as putting a cup on their head.

One year olds love teasing, taking off clothes, scaring others, toilet humour and acting like an animal.

Two year olds often use language to make you laugh by misnaming something, pretending dogs say moo, and using nonsense words. Children of this age were also found to have a mean streak, making fun of others and being aggressively humorous, such as pushing someone.

But three-year-olds like saying naughty words to be funny, and try to trick you.

Dr Elena Hoicka, Bristol associate professor and the study’s lead author, said: “It is important that we develop tools to determine how humour first develops so that we can further ­understand not only the emergence of humour itself, but how humour may help young children function ­cognitively, socially, and in terms of mental health”.

It’s interesting that Dr Hoicka sees the emergence of humour as a tool to track a child’s healthy development, to help early years educators and ­specialists drawing up the national curriculum for nought to five years.