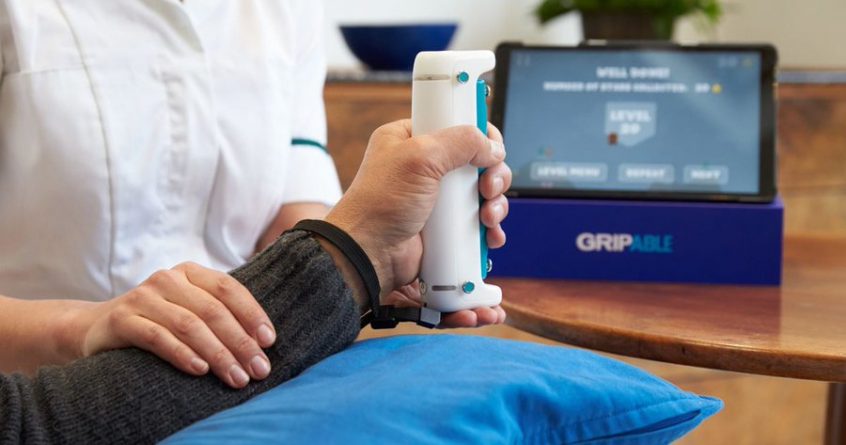 After a stroke, rehabilitation is often slowed down by the cost and availability of occupational therapists and physiotherapists.

Upper limb damage is the most common physical side effect of stroke, with 60% of survivors having persistent arm weakness. The key component in recovery is repetitive specific exercises. But who would supervise them?

Now a rehabilitation device that can up the amount of arm exercises stroke patients do on their own should change all that. By playing games.

Five million people are living with arm weakness, and stroke damage accounts for one million of those.

Researchers at Imperial College London (ICL) have created the GripAble device, consisting of a lightweight ­electronic handgrip that feeds ­wirelessly to a standard PC tablet and enables the user to play arm-training games.

Patients squeeze, turn, or lift the handgrip, and it vibrates in response to their performance.

The device uses a novel mechanism, which can detect the tiny flicker ­movements of severely paralysed patients and channel them into controlling a computer game.

In a clinical trial of 30 patients, researchers from ICL and the University of Southampton found the device enabled around 104 upper limb repetitions per day whereas conventional therapy achieved only 15.

“Our findings suggest that a ­significant proportion of stroke ­survivors may potentially benefit from GripAble alongside conventional therapy,” said Michelle Broderick from ICL, lead author of the study.

“Stroke is a major cause of arm weakness in the UK. It can significantly impact survivors’ lives making it hard for them to do routine daily tasks, limiting their independence.

“Previous studies have shown that repetitive exercise is vital for improving arm weakness.

“This study is the first to show that a rehabilitation device, GripAble, can achieve significant increases in the amount of exercise patients do compared to supervised therapy.

The 30 stroke patients were taught to use GripAble in a single training session. The participants were then left to use the device without any supervision over eight days.

Twenty-six patients were able to use the device meaningfully with their affected UL.

Of those patients, 57% found the device easy to use and 63% felt that it promoted UL recovery.