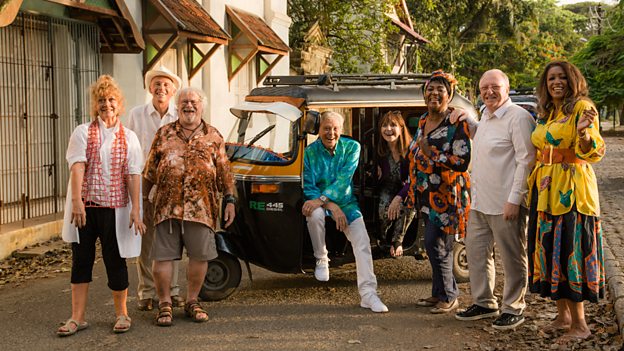 BBC One announced hit travel documentary series The Real Marigold Hotel will move to the channel when it returns to screens in early 2017.

Inspired by, but otherwise unrelated to the blockbuster film, the series documents the authentic experience of eight characters in their golden years as they head to India on an experimental adventure to see if they would consider retiring to the other side of the world. The new four part series will see the group travel thousands of miles from home and this time land in Kochi, a city in the southwest Indian state Kerala, to test whether they can set up a more rewarding retirement than in the UK.

BBC Two has confirmed a two-part Christmas special for 2016 The Real Marigold on Tour (w/t), starring some familiar faces from the first series of The Real Marigold Hotel. Four of the original cast return to BBC Two as actress Miriam Margolyes, dancer Wayne Sleep, darts champion Bobby George and chef Rosemary Shrager test out different retirement communities around the world, travelling to Florida and Japan.

Made by Twofour, the series successfully premiered on BBC Two earlier this year with impressive ratings and critical acclaim. It’s the highest rating factual series on BBC Two this year with a series consolidated average of 4.1million/13.6 percent share, and was awarded a prestigious Rose d’Or Award.

Charlotte Moore, Director BBC Content, says: “The first series was a big hit that connected with viewers of all ages in a really authentic and heart-warming way. It was entertaining whilst brilliantly enlightening which makes it the perfect fit for BBC One. It celebrates a big universal subject that we all care about and I’m looking forward to watching our new cast of characters explore India and reach an ever broader audience on BBC One.”

Patrick Holland, Channel Editor BBC Two, says: “BBC Two has a strong track record of creating bold new factual formats and Marigold proved to be an instant break through. Who would have thought that a show about retirement would become such a hit with audiences young and old? Moving to BBC One means we have the space on BBC Two to commission new series like Second Chance Summer and Life and Death in a Week. I wish the next wonderful group of senior travellers every success in their new home.”

Andrew Mackenzie, Chief Creative Officer of The Twofour Group, says: “The Real Marigold Hotel is a success story that we’re incredibly proud of and after winning the Rose d’Or we’re delighted to be working with the BBC to grow the series. The Christmas specials on BBC Two see Miriam and the gang in incredibly entertaining form and we’re excited to introduce a new band of intrepid travellers to India on BBC One.”

The Real Marigold Hotel series on BBC One is a Twofour production. It is Executive Produced by David Clews and Andrew MacKenzie and David Vallance is the Series Editor. It was commissioned by Charlotte Moore, Director BBC Content, and Clare Sillery, Acting Head of Commissioning, Documentaries.

The Real Marigold on Tour (working title) on BBC Two is also a Twofour production. It is Executive Produced by David Clews and Andrew MacKenzie and Simon Draper is the Series Producer. It was commissioned by Patrick Holland, Channel Editor BBC Two; and Clare Sillery, Acting Head of Commissioning, Documentaries.