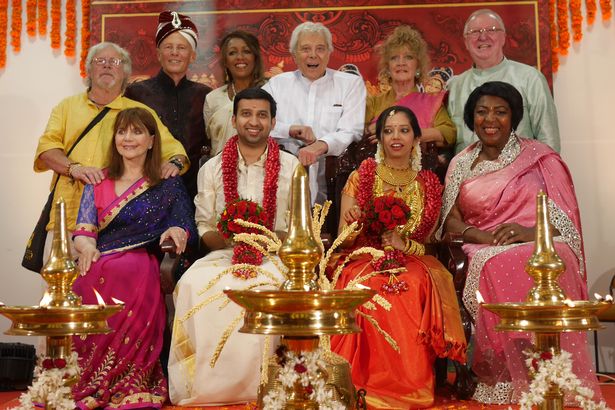 So many sights moved me in the beautiful province of Kerala, southern India – but sitting down to share a meal with a local family, one in particular stood out.

The elderly matriarch was exactly where she should be – at the centre of everything.

Me and seven other well-known faces, eight “oldies”, were there to sample life in Kerala, and in particular, the city of Kochi, to see if we would choose it as a place to live out our final years.

Among the reasons, the way the elderly are treated in society would certainly be one of them for me, at the age of 79.

Little did I know it would be the trip of a lifetime, somewhere I could imagine myself living and showing my wonderful grandchildren.

Here, the older generation are included in their busy extended family, and respected in everyday life, not isolated, and certainly not forced into a situation where they might need external care – proving such an issue now here in the UK.

I’d met only one of my fellow retirees before – I interviewed Lionel Blair several decades ago. But the others, Rustie Lee, Amanda Barrie, Sheila Ferguson, Dennis Taylor, Bill Oddie and Paul Nicholas were strangers. We bonded immediately.

Rustie Lee and I got close within minutes and Amanda Barrie shortly after. Bill Oddie and I became buddies because we’re the only scientists in the group.

It’s unreal to be in the company of Dennis Taylor, giggling at his one-liners, after listening to his dulcet tones for years commentating on snooker tournaments.

As a group we get on exceedingly well. No harsh words, no crises, no jockeying for position, no lost tempers. Honest.

Kerala, “the garden of India”, is famous for its backwaters, great open waterways teeming with life. Each narrow strand of land is peopled with villages, churches and schools. Villagers spend a lot of their lives on and in the water.

Literally in the water, bathing, brushing their teeth, washing clothes and travelling by boat.

Kerala also has the highest literacy rate, 98%, in the whole of India. A morning walk is punctuated by crowds of children proudly wearing their school uniforms on the way to morning classes.

Twice, I was invited to join our drivers for dinner with their large, extended families and it was here I got my glimpse of an older person’s life.

In the UK, as we get older we seem to become more isolated from our families.

Older people are allowed to close themselves down – and then loneliness can become a problem, which can have a great impact on health at any age. We don’t have a culture of keeping older people involved so they are sidelined.

As a result of this interaction, I would theorise dementia is less common.

Of course the culture there is for extended and not nuclear ­families, as we have – it is not so easy for us to care for our elderly in smaller families.

But we can learn lessons – that we should be more supportive of older family members and include them, and to prize what they can give us; not to only value productivity.

In order to get an immediate feel for how we might fare in India, should we decide to retire there, we were ­introduced to some expats who’ve opted for the Indian life.

To a man and woman they wax lyrical about life in India and what the country can offer.

Medical care is also cheap. Standards of medicine can be high, some hospitals have cutting edge technology, treatment and highly qualified specialists.

But, if you want to be closer to nature there’s a surfeit of ayurvedic doctors covering all alternative medicines. But this is where scepticism overtakes me.

Ayurvedic medicine isn’t evidence-based but that doesn’t stop several in our group enjoying it and feeling better for it.

The trip also gave us the chance to learn about love and marriage in India. Marriage is traditionally “arranged” and I meet two couples who are variations on the theme.

One of our drivers is very excited because he’s meeting his fiancee for the first time in six years – the time it has taken her father to accept their union.

So this marriage is to the far left of the traditional system where couples cannot even see each other let alone get married without parental permission.

Then Rustie and I have the pleasure of meeting a couple to the right of this spectrum, very free and easy, as are their families. They meet socially on many occasions, decide they love each other and want to get married.

We get kitted out in glittering saris for their opulent wedding.

Visiting Jew Town, a part of Kochi where the Jews first settled 2,500 years ago, will stay with me forever.

The Jews thrived because the local Rajas valued their skills as teachers and traders, one of them even building a synagogue next to his palace.

I find this little district with its winding streets and bazaars very moving. The Jews were loved here.

As someone who grew up in an orthodox Jewish family and faced anti-semitism at school and at work, this is something I’ve never felt in my life.

A 13-hour Indian train journey is a glorious adventure. Our reservations are the most luxurious but we’re packed like sardines and I emerge at the other end with bedbug bites all over my feet and ankles!

Our destination is the city of Madurai, which has the largest Hindu temple in the world and it’s a sight for sore eyes.

It is dedicated to the deity Meenakshi and attracts women and couples who want engagements or marriages blessed.

I’ve been to India before and love it, but this trip is to see if India loves me.

Right at the end, I’m lucky enough to find my ideal spot. About an hour along the coast from Kochi, I find a house on the beach that fulfils my every dream.