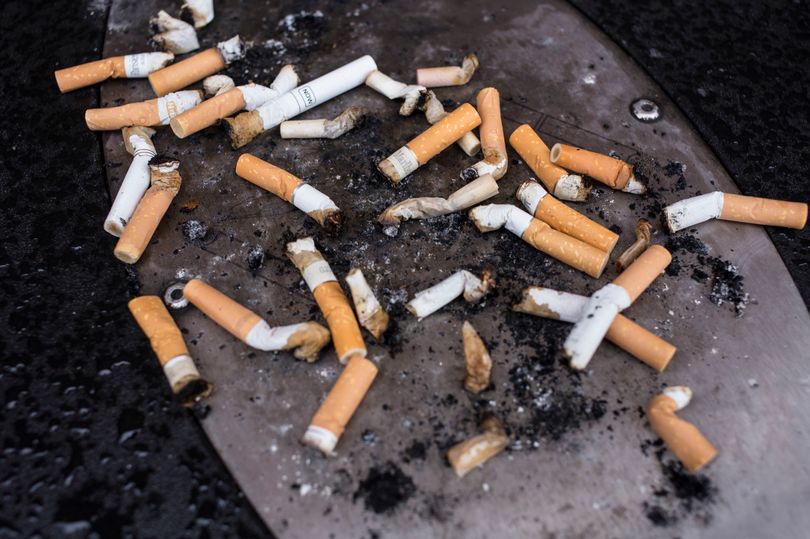 Do the heaps of cigarette butts that litter the ground where smokers gather get on your nerves?

Did you know the filter tips on cigarettes are the most common item of litter in the world?

The largest part of most cigarette butts is a non-biodegradable plastic filter made of cellulose.

Filters first appeared in the 1950s. The tobacco industry claimed filters made cigarettes safer by absorbing some of the tar that was blamed for the lung cancer epidemic.

We now know, says the BMJ, that this safety argument was a myth, one of many created by the tobacco industry to sell cigarettes.

Filters did reduce tar when ­cigarettes were tested in smoking machines designed by the industry, but not when smoked by people.

Realising this, the industry shifted the focus from trying to find a filter that would reduce toxins to describing cigarettes with misleading terms such as ‘light,’ ‘low tar,’ and ‘natural’.

These terms are now prohibited in many countries, so should we be considering a ban on the filters we now know to be ineffective?

The tobacco industry has worked hard to avoid anything that casts ­cigarettes in a bad light, including distracting attention from the pollution caused by butts.

“Filters are the deadliest fraud in the history of human civilization,” says Robert N Proctor, professor of the history of science at Stanford University. “They are put on cigarettes to save on the cost of tobacco and to fool people.

“They don’t filter at all. In the US, 400,000 people a year die from ­cigarettes – and those cigarettes almost all have filters.”

The EU will ban many single-use plastic products, such as cutlery, plates and straws, from 2021.

However, this ban doesn’t include one of the leading sources of plastic waste that pollutes our public spaces worldwide: the cigarette butt.

It’s not clear why filters weren’t included in the ban on single-use ­plastics. However, the tobacco industry mounts large-scale lobbying activities to divert attention from its damaging products.

The exclusion of filters from the plastics directive seems like a missed opportunity, especially since the ­intention of any filter ban would not be to reduce cigarette smoking.

However, EU states have committed to assure “health in all policies”.

A ban on selling single-use plastic cigarette filters would no doubt be resisted hard by the tobacco industry as it challenges the deception it has perpetuated in selling filter cigarettes. But a ban would reduce litter.