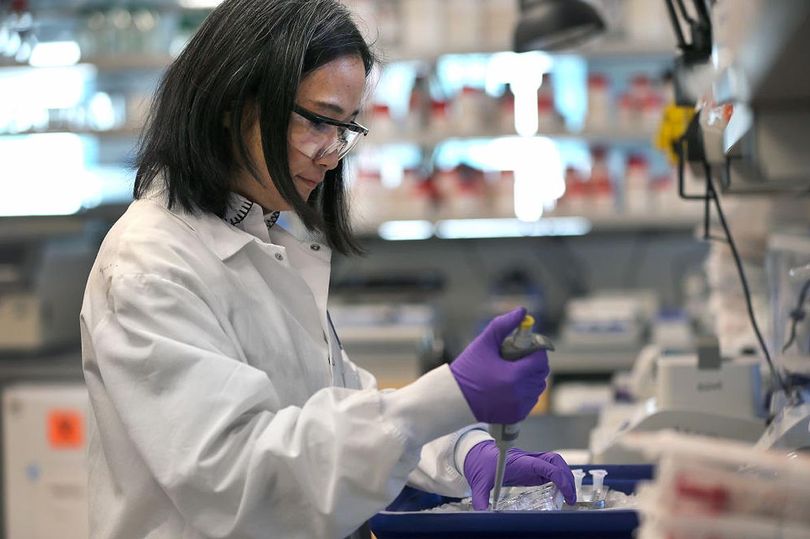 There’s a small glimmer of hope that at some time in the coming months we might be able to tackle the Covid-19 outbreak by trying out drugs that are already in use against other viruses.

All of these drugs are experimental for use in Covid-19, but they give reason for modified optimism. But first, some information about the virus we’re confronting.

The Covid-19 virus is extremely small and tricky.

It’s only a millionth the size of the human cells it invades, but persuades them to supply it with the building blocks to make up to 1,000 new viruses. Then it bursts the cell to liberate its progeny around our bodies.

The virus has an outer membrane which disintegrates on contact with soap and water and this is the reason we’re being encouraged to wash our hands for 20 seconds – to give the virus the time to die.

The virus usually enters through the mouth, nose and eyes and, once inside, the spikes on the surface of the virus make contact with a human cell.

There’s a place on the spike that fits like a key into a protein, ACE2, found on the surface of some human cells, particularly those in the respiratory tract. Hence the classic symptoms of covid infection: continuous cough and shortness of breath, high temperature and pneumonia.

ACE2 also plays a part in controlling blood pressure, and early data from a hospital in Wuhan suggest someone with high blood pressure is vulnerable to infection. The fact that the virus’s entry point is linked to blood-pressure regulation may be significant.

Is there a way to overcome it?

While we’re waiting up to a year for a vaccine, a search is going on for an antidote drug that might combat coronavirus.

To start off, researchers are sifting through drugs already being used against other viruses, including HIV.

A superb editorial in the Economist illustrates the possibilities. Following the lead of those first HIV drugs, some of the most promising Covid-19 treatments are molecules known as “nucleotide analogues”.

They look like building blocks to a virus but if it tries to use them to build into viruses they’re stopped from reproducing.

One nucleotide-analogue drug that shows promise in fighting Covid-19 is remdesivir. It was originally developed by Gilead Sciences, an American biotechnology firm, as a treatment for Ebola fever.

There are now various trials of remdesivir going on in Covid-19 patients. Gilead is organising two in Asia encompassing 1,000 infected people in all. The trials are expected to give us preliminary results in mid-to late-April.

Other nucleotide analogues are also under investigation.

When seven drugs were screened for activity against Covid-19, researchers at the State Key Laboratory of Virology in Wuhan isolated ribavirin, an antiviral drug used to treat hepatitis C, and it’s already on the World Health Organisation’s list of essential medicines.

What other drugs could work?

Nucleotide analogues aren’t the only antiviral drugs. Second generation anti-HIV drugs, the “protease inhibitors”, when added to nucleotide analogues, revolutionised the treatment of AIDS. Could they do the same for Covid-19?

Kaletra is a mixture of two protease inhibitors, ritonavir and lopinavir. It was tried in SARS patients in 2003 with some benefit. Will it be effective against Covid-19?

Another drug, Favipiravir (favilavir), was developed to treat the flu virus and also might have some effect on Covid-19.

Then there’s chloroquine, a drug mostly used to treat malaria, shown in the 2000s to curb the ability of SARS to get into cells and once inside them, to reproduce.

That’s a promising line of enquiry we’re pursuing. Even some cancer treatments are being considered.

Drugs that would kill Covid-19 is the obvious first step to take, but there are other radical approaches available.

What about trying to boost the immune system so we can better fight the infection?

Interferons are one option to try out this strategy. They work by stimulating the immune system to attack cells infected with a virus and stop viral replication.

Interferons might be a useful for halting the progress of Covid-19, possibly used with other drugs. But, then again, sometimes the immune system can overreact to Covid-19, doing untold damage to the body.

The virus often kills by overstimulating the immune system’s inflammatory response, precipitating organ failure. This over-reaction is mediated by a molecule called interleukin-6, which has previously been targeted in autoimmune disease.

And we already have a drug to do that. An antibody called Actemra (tocilizumab) stops interleukin-6 from working, so damping down the response of the immune system to an acceptable level.

It was developed for use in rheumatoid arthritis and China has just approved it for use against Covid-19, with promising results so far.

To roll out these experimental drugs what we need is thousands of patients in multiple trials. International trials are therefore a high priority because they’re the only way we’ll get enough numbers to evaluate new drugs.

Soumya Swaminathan, chief scientist at the WHO, has in mind a “master protocol” for trials in many countries so that patients from around the world could be studied.