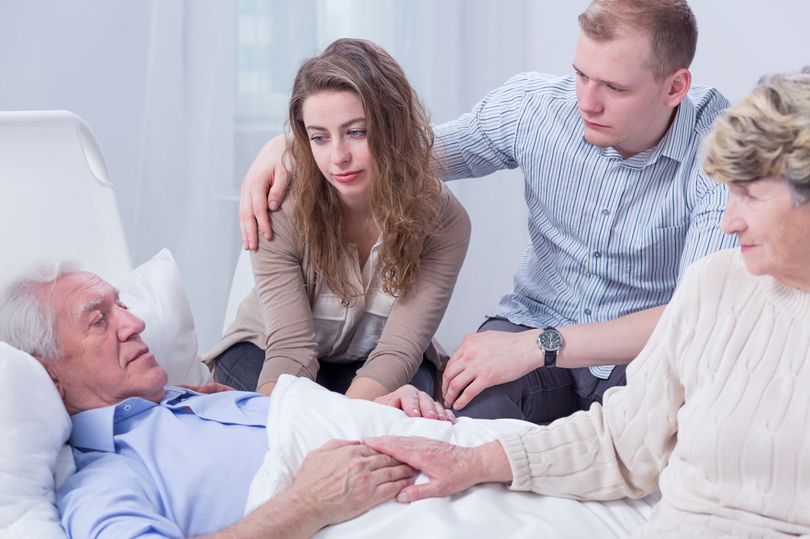 Having been close to two of each kind of death, it became clear to me that what distinguishes dying well from dying badly is the effect on those who are left behind – partners, children, family and friends.

When someone dies well, as my uncle did, the family feels whole, complete, happy for them, unashamed. And with no regrets.

None of us wished his death had been any different, none of us wished that we had done more for him or felt there were things we wanted to say or do for him but had not.

This calm and serenity is not possible when someone dies badly, where there are unresolved conflicts, bitterness and resentment.

I have no ready recipe for how we should die well but what I have noticed in those who do, and have the time, is that they put the comfort of their family and friends before selfish considerations. So they are open, accepting and generous.

They talk intimately to those who surround them, allowing deep, spiritual conversations and contact before the moment of dying. They allow “closure” with all those who love them.

They are physically open, too, hugging, kissing and holding others. The flow of love and energy is tangible all around them and it makes for such peace for everyone.

To create that peace is our responsibility as we face death.

Consider a living will

One of the ways you can help reassure your family and friends about the end of your life even as death approaches, is to draw up a living will. It brings you peace of mind as it makes clear how you want to die.

The living will – also known as the advance directive – makes clear treatments you don’t want if you’re seriously ill in the future and can’t let anyone know what you want to happen. A living will can help you to die well.

A living will brings you the comfort that, in the future, under clearly defined circumstances, you won’t be given treatment such as antibiotics, tube feeding and being kept indefinitely on a life-support machine which will help you live longer.

You never know what’s around the corner or what lies in the future for you. By the time you find out, it may be too late to make any decisions for yourself because you’re not physically or mentally able to do so.

This leaves your friends and family looking after you with difficult decisions to make about your treatment, hampered by not knowing what you would have wanted. A living will avoids all that.

The British Medical Association, The Royal College of Nursing and the government have all confirmed their support for living wills.

Any patient entering hospital in the US is asked to register their views on resuscitation, so that action in accordance with their wishes will be taken should an emergency like a cardiac arrest occur even if you cannot tell the doctors your decision at the time.

The living will has two further advantages – it gives you the chance to discuss your views calmly with doctors treating you and with your close family and friends long before a decision has to be taken.

You also have the opportunity to discuss difficult issues with family and friends without any pressure.

As we get older it’s impossible to avoid bereavement among family, friends and loves ones. Perhaps the worst is the loss of a partner when the grief of bereavement is not always easy to describe.

There may be ambivalence at the time. For example, sorrow and disappointment may be mixed with anger, guilt and anxiety.

Bereavement is a stress that can precipitate mental illness, psychosomatic illness or even sometimes suicide.

The reorganisation of daily life that’s called for following the death of a spouse is an added source of stress both with regard to emotional deprivation and with living arrangements.

Such is the sadness, strain and grief the life of the bereaved person may be threatened.

The chaos of grief

There is no right way to grieve. The point about grief is not how it is done but that it should be done somehow. Things may go wrong. Grief may be denied totally, or it can begin and then be inhibited.

It may be turned inwards instead of outwards to relationships with other people.

If grief is delayed or inhibited, superficial relief is gained only for a short time. If grief is denied altogether, the person may slip from grief, which is normal and healing, into a clinical depression which is distressing and not normal.

When grief is turned inwards into the body, it may cause physical illness. Widowers often complain of heart trouble which may literally go on to result in death from a broken heart. Widows consult their doctors with gastric upsets and rheumatic conditions.

It’s very easy to confuse grief with depression. A bereaved person feels sad and lost. Appetite goes and sleep is interrupted. There may be reproach for not having cared more or done more for the lost one.

Depression is accompanied by feelings of worthlessness and hopelessness, withdrawal from the world and a conviction that life isn’t worth living. A depression like this needs medical help.

Preparing for the death of a parent

As a parent ages or becomes ill, it’s natural to want to avoid thinking about losing them. But emotionally preparing yourself for a parent’s death can enrich both the end of your parent’s life and your own future life.

It simply amounts to being kind. Take the opportunity to tell them what you need them to know. Say “I love you” or “I’m sorry” or “I forgive you” while you have the chance.

Then honour your parent while they’re still alive.

Don’t wait until the funeral to share funny stories or talk about how much they meant to you.

Work with your parent to make a record of their life, stories, recipes, and favourite sayings. You can record them in a book or a video to be kept for future generations.

I remember when my mother died I thought I’d prepared myself. When she did die I realised there’s a big difference between expecting death and actually experiencing it. Nothing can prepare you for the shock of realising you’re an orphan.

While it’s natural to want to avoid talking about difficult topics like preparing for the death of a parent, being emotionally and financially unprepared only makes the situation harder.

Even if your parent is reluctant to discuss the topic with you, broaching the subject before a crisis hits allows them to make their wishes clear.