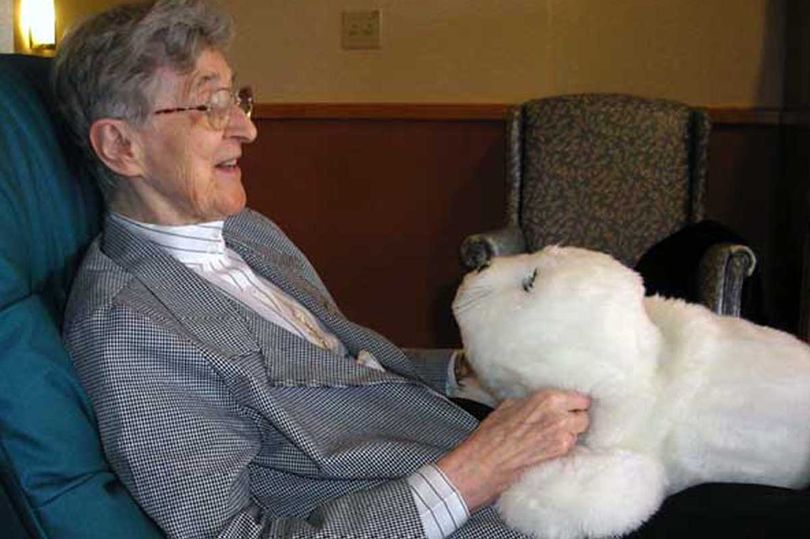 Now here’s a stat that’s food for thought. By 2050 there’ll be as many adults aged 65 plus as there are children under 18.

This means there are going to be more and more people with dementia, and experts are turning to artificial intelligence and robots to help care for them.

One novel Japanese robot is a furry baby seal named Paro which stands in for a real pet.

Paro responds to touch and sound, and makes cooing noises similar to those of a real baby seal. When you stroke Paro and talk softly to it, it will gurgle and turn towards you.

If you speak to it sharply, it will immediately stop whatever it’s doing and try ­something else to please you.

Unlike real pets, Paro never needs to be fed or walked, it never jumps, scratches or growls. It’s a companion 24/7. It’s constant and tireless.

The patient is always the centre of its attention, it never sleeps, is never distracted and wants nothing back. Paro can also alleviate the intense anxiety and agitation that’s often a feature of dementia.

Research shows a patient holding a Paro is less likely to wander. “I’ve been in this field for 25-plus years,” says Randy Griffin, a nurse who created the first Paro training programme in the US.

“There isn’t any other thing we have in dementia care today that is effective at every stage of this illness.”

Paro is about the size and weight of a baby and patients relate to it like a real child. “Often you’ll see someone petting Paro and he’ll cry, and they’ll say, ‘Don’t cry.’ They’re taking care of something. He gives the person the ability to give love as well as receive love,” Griffin says.

It’s important, however, not to deceive. “We never present him as anything other than what he is – a robotic seal,” says Dr Kathy Martyn, a health scientist at the University of Brighton. “He’s an aid. He’s part of the toolkit we use to manage agitation and distress.”

Some patients say they know Paro is a toy, while others clearly see it as a living pet.

Using drugs to treat the agitation that plagues people with dementia increases the risk of falls, infection, and further confusion.

Sarah Petersen, professor of nursing at the University of Texas, US, says that most of her patients are on 14 to 28 medicines a day. Sarah asks why wouldn’t she use a robot to control anxiety rather than four or five pills.