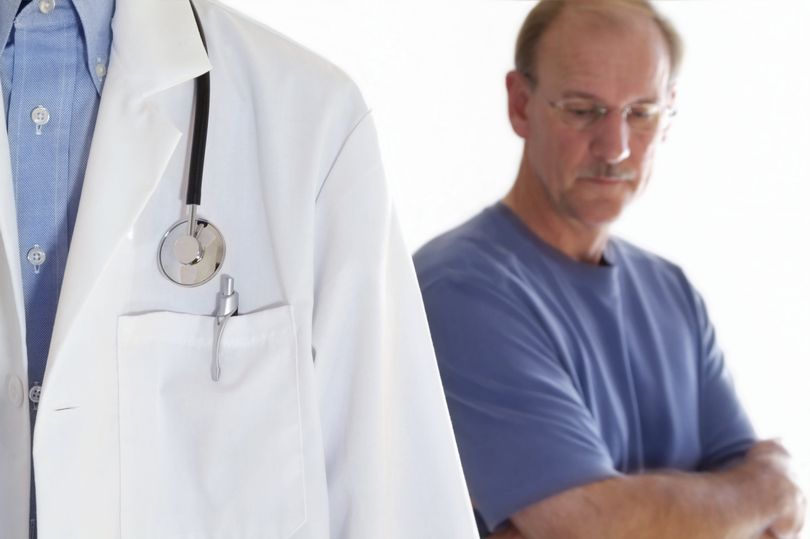 Men are notoriously resistant to going to see a doctor – even if their symptoms are unpleasant and they fear they may be suffering from something serious. Why?

Do they hate admitting to a ­weakness? Do they see confessing to an illness as unmanly? Are they just shy?

So reluctant are men to seek medical help they’d rather do almost anything than go to the doctor. Are they just stubborn?

Eric Klein, chairman of the Glickman Urological and Kidney ­Institute, at Cleveland Clinic in the US, says: “The reasons go beyond mere stubbornness.

“They are much more complicated, involving entrenched societal attitudes about masculinity and male behaviour, conditioning that starts in childhood that dictates men always should act tough and never show signs of weakness or dependence.”

Even little boys are told not to cry and later to keep a ‘stiff upper lip’.

So early on in life they find ­themselves having to prove their masculinity time and time again, ­especially to other boys and men.

It becomes a habit. A bad habit. Men suffer more illness than women and don’t live as long.

They have more heart disease, chronic liver disease, alcoholism, suicide and violence-related death than women. It’s not a picnic being a man.

Young men between the ages of 18 and 44 suffer most if they live alone. Moreover, “many young men think they are ­invincible or untouchable”, Klein says.

A survey by the Cleveland Clinic found that baby-boom men – those born between 1946 and 1964 – were the least likely to discuss their health issues with anyone.

“A quarter of baby boomers don’t discuss private topics with anyone.”

The online survey, conducted among 1,174 American men aged 18 and older, found that 72% would rather do household chores than see a doctor, while 77% said they preferred to go shopping with their wives or partners over a trip to the doctor.

Only half said they considered an annual check-up a regular part of taking care of themselves.

Research by assistant professor Diana Sanchez and her colleagues at Rutgers University in New Jersey concluded that men holding traditional beliefs about masculinity were the most reluctant to see doctors.

“Basing self-esteem on self-­sufficiency and bravery translates into minimising health problems and failing to engage in preventive care, or in delaying care,” Sanchez says.